Clown Arrested After Hitting Man In Face With Pi

The Return of the Modern Philosopher 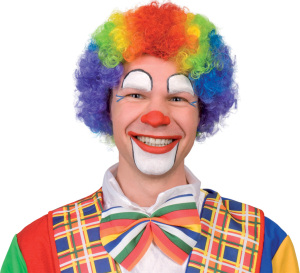 Calculo, The Math Loving Clown, was arrested and charged with assault after hitting a Milford man in the face with Pi.

The incident occurred at a child’s birthday party, and the victim, who asked to remain anonymous, was the father of a guest.

According to witnesses, Calculo had been entertaining the guests by making irrational numbers out of balloons, solving humorous math equations, and quizzing kids on the decimal values of fractions.

“Then it kinda went to hell in a hand basket wicked quick,” Tom Beecher, a parent of one of the guests, told this Modern Philosopher.  “The Math Clown asked everyone who loved Pi.  Of course, all the kids raised their hands.  Some of the parents did, too.”

What happened next will be a part of birthday party lore for centuries, and further fuel the world’s fear of both clowns and math.

“He reached into his bag of tricks…

Motherhood now, or should I study math first?

It’s doggerel time again, this time with apologies to Harry Graham, who apparently didn’t write the original “Oh mama dear, what is that mess ……”.  See  allpoetry

“Oh Mommy dear, what are these sums you can’t do anymore?”
“Hush,hush my child, just do your best, It’s called the Common Core.”

Line Of The Week 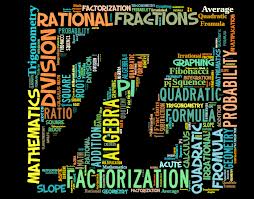 And now Pythagoras again, with bonus

I was attempting to solve a geometrical problem the other day, a problem which, due to my complete misunderstanding, had no solution, when this popped out. It is probably bog-standard, but new to me, and this time I don’t have the heart to check if it is one of the 100 proofs of The Pythagoras theorem. 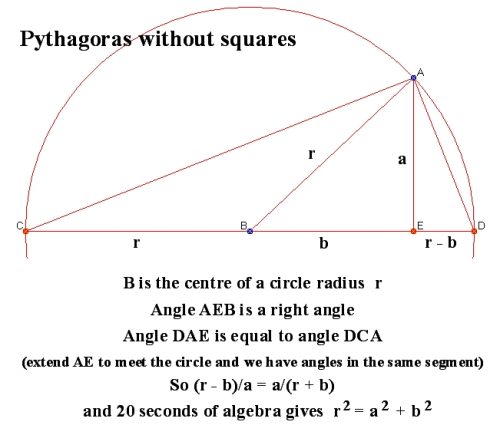 Now let theta be the angle ACB. Angle ABD is then 2*theta.

I’ve done most of the work,

“Why do Americans stink at math?” Your weekend MUST-READ

I reached this long but well written and quite compelling article by Elizabeth Green via Dan Meyer’s blog. Everyone should read it, especially education administrators and decision makers, all the way to politicians.

With the Common Core, teachers are once more being asked to unlearn an old approach and learn an entirely new one, essentially on their own. Training is still weak and infrequent, and principals — who are no more skilled at math than their teachers — remain unprepared to offer support. Textbooks, once again, have received only surface adjustments, despite the shiny Common Core labels that decorate their covers. “To have a vendor say their product is Common Core is close to meaningless,” says Phil Daro, an author of the math standards.

Most policies aimed at improving teaching conceive of the job not as a craft that needs to be taught but as a natural-born talent that teachers either decide to muster or don’t possess. Instead of acknowledging that changes like the new math are something teachers must learn over time, we mandate them as “standards” that teachers are expected to simply “adopt.” We shouldn’t be surprised, then, that their students don’t improve.

and now for the dictionary 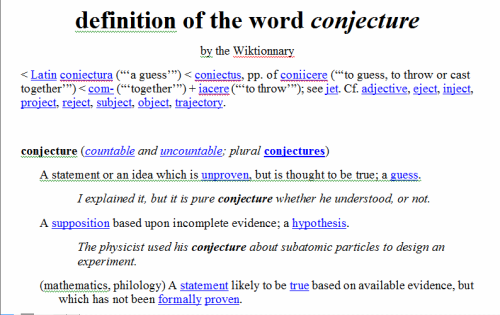 Read this, it is an excellent post on the use and meaning of the words in the hexagon (which I borrowed from Michael Pershan’s post), and other relevant words: 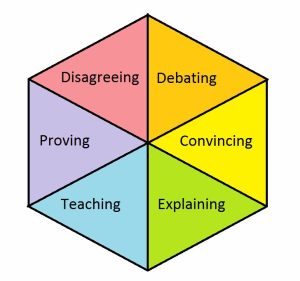 This from the CCSS math grade 8 geometry:

2. Understand that a two-dimensional figure is congruent to another if
the second can be obtained from the first by a sequence of rotations,
reflections, and translations; given two congruent figures, describe a
sequence that exhibits the congruence between them.

In fact, one is enough, a rotation or a translation: 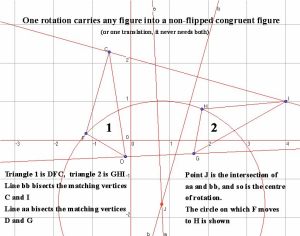 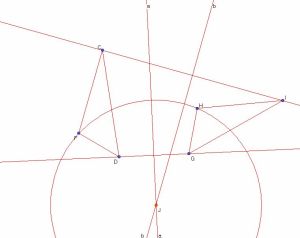 Here’s another thing that is long past its expiry date.

What are Highest Common Factor and Least Common Multiple actually for? And “It makes adding fractions simpler” is just nonsense.  It may be that much later on, for those with a real interest in pursuing math, there is something useful there, but such people at that stage would be able to pick up the ideas and apply them in about 10 minutes.

If I want to add two fractions with different denominators then the simple and fairly obvious rule: “multiply top and bottom of each fraction by the denominator of the other one” is perfectly adequate, and if the student spots a common factor in the resulting fraction it can be removed then.

A separate but equally pointless activity is adding fractions with seriously different denominators. If you really want the answer then use a calculator. And get a clue about checking the result for realism.

I am sure there is more stuff in math courses which could be sent on its way, leaving time to do some interesting stuff.

Angles and the CCSS – oops!

Grade 4 content
Geometric measurement: understand concepts of angle and measure angles.
5. Recognize angles as geometric shapes that are formed wherever two rays share a common endpoint, and understand concepts of angle measurement:
a. An angle is measured with reference to a circle with its center at the common endpoint of the rays, by considering the fraction of the circular arc between the points where the two rays intersect the circle. An angle that turns through 1/360 of a circle is called a “one-degree angle,” and can be used to measure angles.
b. An angle that turns through n one-degree angles is said to have an angle measure of n degrees.

My comments:
1. Well, this is the first occasion that the word “ray” is used, in the whole document, and as expected by now there is no definition!
2. There is an attempt to define measurement of angle, which really confuses me.  Which circle ? Any circle ? What is “the circular arc” ? Since when did angles turn ? And I have this vision of making a one degree angle out of card and measuring angles with it.
3. An this is from the Fractions section : “note 3 Grade 4 expectations in this domain are limited to fractions with denominators 2, 3, 4, 5, 6, 8, 10, 12, and 100.”
So what about 1/360 ?

Am I nitpicking again?