The angle bisector theorem and a locus

The theorem states that if we bisect an angle of a triangle then the two parts of the side cut by the bisector are in the same ratio as the two other sides of the triangle. So I thought, what if we move the point, G in the gif below, so that GB always bisects the angle AGC, then where does it go ? Or, more mathematically, what is its locus. Geometry failed me at this point so I did a coordinate geometry version of the ratios and found that the locus was a circle ( a little surprised !). The algebra is fairly simple.

What was a real surprise was that if we take the origin of measurements to be the other point where the circle cross the line ABC, then point C is at the harmonic mean of points A and B. There is YOUR problem from this post.

Getting the construction to show all this was tricky. It is shown below. 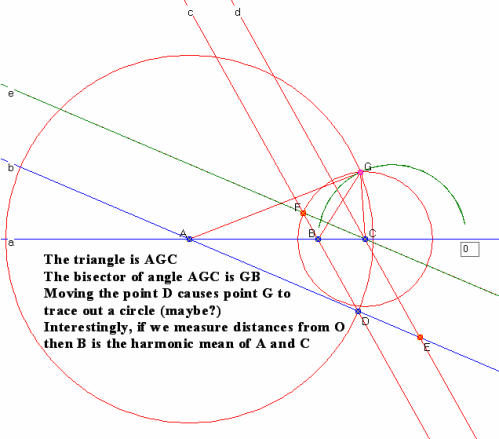 I did the construction on my geometry program, Geostruct (see my Software page).

Line bb passes through A. Point D is on line bb. Point E is on this line and also on the line through C parallel to line cc joining B and D, So AD and DE are in the same ratio as AC and CB. When point D is moved the ratios are unchanged (feature of the program). So the point of interest is the intersection of a circle centre A, radius AD, and a circle centre C and radius DE (= FC)