The row operation matrix inversion method is so neat and ingenious, and it has the same operations for all dimensions of matrix.

The first display shows the original matrix on the left. Nothing has been done yet. 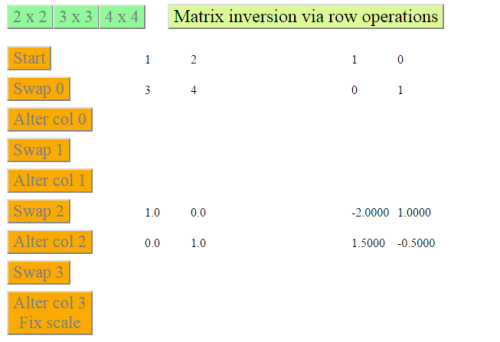 The second one is the 2 x 2 matrix inverted.

The third is the 4 x 4 matrix inverted.

The matrices can be altered with the file name for the application, “matrix prog 3.html”. using right click and “view page source”. You are then on your own, with javascript !!!!!!!!

Angle between two lines in the plane……Vector product in 3D…….connections???????

get it here with the introduction .doc file here

when I decided that the “angle between two lines” routine needed a rewrite. Some surprises ensued ! 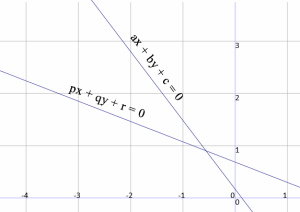 The angle between the lines is  φ – θ,

and we have the two expansions

This is where the books stop, which turns out to be a real shame !

have the same angle between them (some things are toooo obvious)

Things are simpler if we look at these two lines through the origin when they both have positive slope. 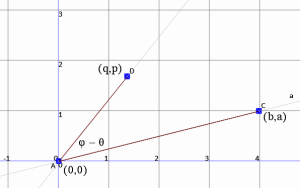 Let us put these into the  tan(φ – θ)   equation above, and once more after tedious algebra

which is a very nice formula for the tan of the angle between two lines.

This is ok if we are interested just in “the angle between the lines”,  but if we are considering rotations, and one of the lines is the “first” one, then the tangent is inadequate. We need both the sine and the cosine of the angle to establish size AND direction (clockwise or anticlockwise).

and we now have

It was at this point that I saw M times the sine of the “angle between” as twice the well known formula for the area of a triangle. “half a b sin(C)”, or, if you prefer, the area of the parallelogram defined by the two line segments.

Suddenly I saw all this in 2D vector terms, with bq + ap being the dot product of (b,a) and (q,p) , and bp – aq as being part of the definition of the 3D vector or cross product, in fact the only non zero component (and in the z direction), since in 3D terms our two vectors lie in the xy plane.

Why is the “vector product” not considered in the 2D case ??? It is simpler, and looking at the formula for sine , above, we have a 2D interpretation of the “vector”or cross product as twice the area of the triangle formed by (b,a) and (q,p). (just as in the standard 3D definition, but treated as a scalar).

Dot product and cross product are much better anyway, and a bit of ingenuity will lead you to the reason for the word “cross”.

This is one of the things implemented using this approach:

Anyway, the end result of all this, for rotating points on a circle, was a calculation process which did not require the actual calculation of any angle. No arctan( ) !