Transformations of the plane are many and various.
The “nice” ones are “rigid motions”, and this term includes rotations, reflections and translations. The shape and the size of a geometrical object are not altered by a rigid motion.
There are also “shape preserving” transformations, called “dilations”, in which an object is stretched or shrunk equally in all directions.
An often overlooked transformation is the “shear”, in which there is a fixed line, and points not on that line are pushed parallel to the line in proportion to their distance from the line. Think of a stack of paper,perfectly stacked, and then pushed sideways so that the side of the pile is still flat. You will see a parallelogram at the front of the pile.
A shear will change the direction of a line, turn a rectangle into a parallelogram and turn a circle into an ellipse,
BUT
the area of any closed figure does not change at all.

Here is the static picture of a fixed point J, a fixed line, the x-axis, and a set of points on the horizontal line through A.
Also two triangles, LND and LDF, which are going to be sheared

And here is the shearing in action, for varying amounts of shear, determined by the value of k.

Notice that triangle LMN changes a lot, and its area changes, but the areas of triangles LND and LDF do not change at all.
Not shown is a rectangle and a circle, which would change into a parallelogram and an ellipse, but their areas will not change with a shear.

For more on this go back to my Christmas post:
https://howardat58.wordpress.com/2015/01/02/quadrilaterals-a-christmas-journey-part-2/

It is a popular activity to join the opposite vertices of a quadrilateral (the diagonals), as in special cases they
have interesting properties. Unfortunately, for the general quadrilateral this does nothing of interest.
However, with the extended or complete quadrilateral we have six vertices to go at, and so we get another “diagonal”:

Things get more interesting when we extend the diagonals and find their points of intersection.

The three points shown circled are the points of intersection of the three pairs of diagonals.

Observe that each diagonal has four points on it, the two vertices interlaced with two points of intersection.

Now we started with “any” quadrilateral so it might be thought that nothing much can be said about measurements and
quadrilaterals in general – not so! To go any futher we need to go back to rigid motions of the plane, and their
effect on plane figures.
A rigid motion of a geometrical object just moves it to a new position, its shape and size are unchanged.
Rotations, reflections and translations (shifts would have been a simpler term)are rigid motions.
Basically what is not changed is distances between points.
The next level of transformation of plane figures adds dilations,stretches and shears. The figures change their
shapes, but one thing remains: relative distances of collinear points. Rigid no longer. 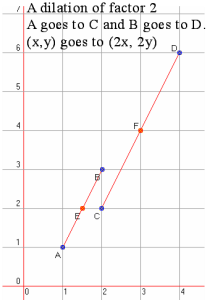 Dilations can be “the same in all directions”, as in the example, and these preserve the shape of a figure but not the
size, or different in the y direction from the x direction, these are the stretches. These turns circles into ellipses !
Shears turn circles into ellipses anyway.
Notice that in both cases the mid point of the transformed line segment is the image of the midpoint of the original
line segment, and it is easy to see that ratios of distances in the same direction are preserved.
It is not quite as easy to see that any triangle can be transformed into any other triangle, with the help of these
extra transformations.
Notice that dilations have a fixed point and shears have a fixed line.

The next three pictures show the effects of
1: A stretch up and down 2: A stretch to the right and left
3. A shear horizontally

What use is all this, you ask. well, here is a gif showing that the medians of a triangle are concurrent, and this is preserved under stretch and shear. This means that you only have to prove it for an equilateral triangle. (which is obvious!)