A surprise parabola and more garden

Idly wondering about the tangents from a point to a circle I constructed the figure below. The point A is on a circle and can be moved round the circle. The chord CD then moves around. The interesting thing is to see the envelope of this chord as the point A is moved. .. 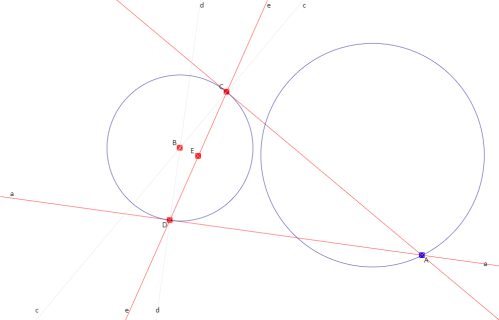 Circles and hyperbolas galore, but when the big circle passes through the centre of the smaller circle the envelope is the surprise parabola. The question is “How do I find the equation of such a parabola? Sensible choice of origin and axes is the first thing. the y-axis is best as the line joining the centres of the two circles. Then you need an equation for the line CD, with a suitable parameter. Then a little bit of calculus………..Nice one for calculus students

Constructions done with my web based program. Try it yourself: GEOSTRUCT

And now for January in Puerto Rico. I don’t know the name of the pink and white flowering tree, but I do know that without my machete the whole garden would be infested with babies from the first one.

This one below is a yellow eleconia, also spreading madly.

And this is a cute little tree with probably poisonous berries.

And what the hell have they done to the post editor. It only works in BOLD

So suppose we have a parabolic curve and we want to find out stuff about it.

Its equation … Oh, we have no axes.

Its focus … That would be nice, but it is a bit out of reach.

Its axis, in fact its axis of symmetry … Fold it in half? But how?

Try the method of part one, with the ellipse. (previous post)

This looks promising. I even get another axis, for my coordinate system, if I really want the equation.

Now, analysis of the standard equation for a parabola (see later) says that a line at 45 deg to the axis, as shown, cuts the parabola at a point four focal lengths from the axis. In the picture, marked on the “vertical”axis, this is the length DH

So I need a point one quarter of the way from D to H. Easy !

and then the circle center D, with radius DH/4 cuts the axis of the parabola at the focal point (the focus).

Even better, we get the directrix as well … 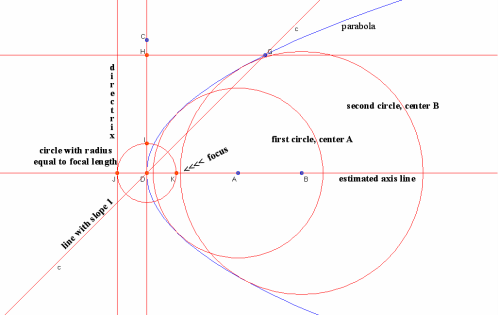 and now for the mathy bit (well, you do the algebra, I did the picture) 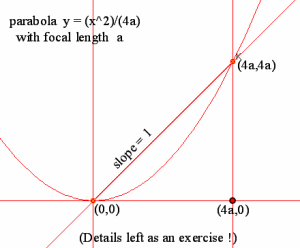 Yes, I know that this one points up and the previous one pointed to the right !

All diagrams were created with my geometrical construction program, GEOSTRUCT

You will find it here:

What they didn’t tell you at school (conic sections)

They tell you that conic sections are exactly what the words describe : Slice a double cone, the edge of the slice is a conic section, parabola, hyperbola, ellipse.

Then they tell you that y = x^2 is a parabola, or that all second degree equations in x and y are conic sections, or worst of all, they come up with the focus/directrix definition.

Well, here goes – (the math is after the picture, and it is so simple) 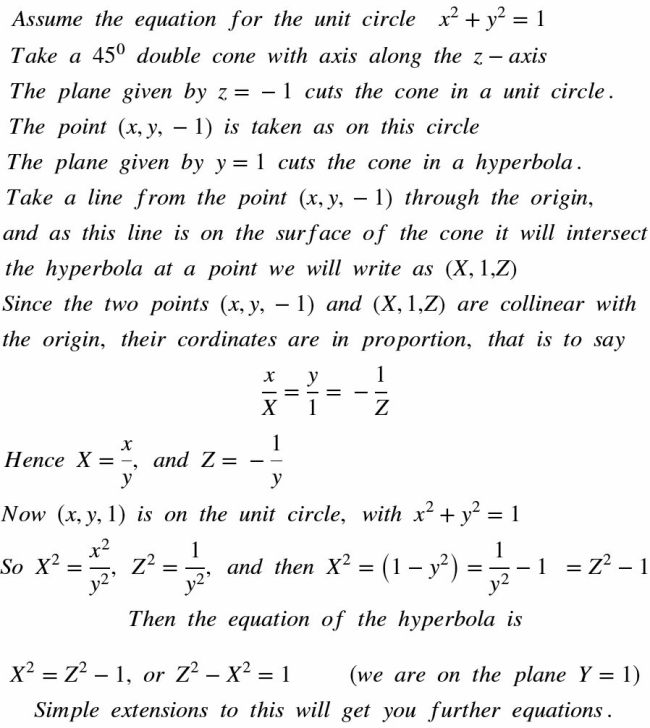 From the previous post (it is now the next one !) it can be seen that projection of the unit circle from the double cone vertex onto the slicing plane will give a second degree equation.  What a nice lead in to these equations, and also projective geometry, and to 3D xyz stuff.

The focus/directrix definition is so “rabbit out of a hat” that it’s time for its retirement. In any case, what use is the focus except for a parabola. And the directrix ? Surely “Directrix” is a female director !!!!!!!!!!!!