It all started with an aside in a blog post in which the author said how
some students have a real problem with statements such as “A square is a
rhombus”.

From early years kids naturally like exclusive definitions, and have to be weaned off this. This would be easier if we were more careful with the word “is”. Even to me the statement ” a square is a rhombus” sounds weird, if not actually wrong. It would be better to be less brutal, and say “a square is also a rhombus” (and all the other such statements).
Even better, and quite mathematical, is the phrasing “a square is a special case of a rhombus”, as the idea of special cases is very important, and usually overlooked.
It is odd that the classification of triangles is done entirely with adjectives and the difficulty is thus avoided (but see later).
After fighting with a Venn Diagram I did a tree diagram to show the relationships: 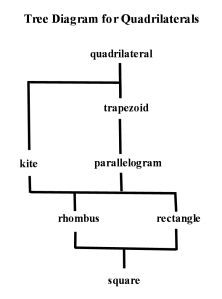 I then got thinking about the words “triangle”, “quadrilateral”, “pentagon” etcetera.

“triangle” : three angles
“quadrilateral” : four sides
“pentagon” and the rest : … angles
The odd one out is the quadrilateral.
Take a look: 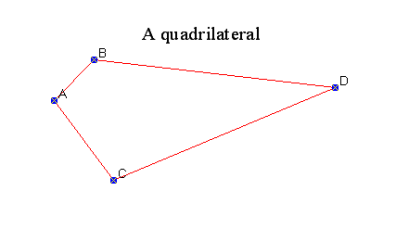 Let us see what the full extended lines look like: 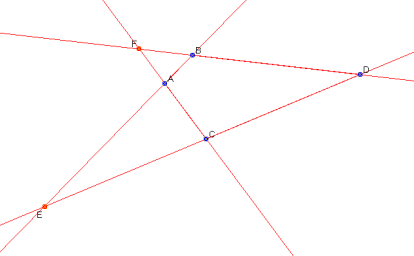 Let ab be the name for the full line through A and B
Likewise ac, bd and dc
Then we can see that the quadrilateral is determined by the points of intersection of the two pairs of lines ab,cd and ac,bd.

ab and cd meet at point E; ac and bd meet at point F
But if we consider the four lines then there are three ways of pairing them up. The two others are ab,ac with bd,cd and ab,bd with ac,cd.
This gives us two more quadrilaterals, and they all have the property that each side falls on one only of the four lines.
The three quadrilaterals are ABCD, FCEB and FDEA
ABCD is convex, FCEB is twisted and FDEA is not convex (concave at A)
Not only that, but also the first two are fitted together to give the third one.
This arrangement is called the “complete quadrilateral”, and has four lines and six points.