Following a recent blog post relating a transformation of points on a line to points on another line to the graph of the equation relating the input and output I thought it would be interesting to explore the linear and affine mappings of a plane to itself from a geometrical construction perspective.

Taking an example, (x,y) maps to (X,Y) with the linear equations

The construction below shows the points and lines needed to establish the point(X,0), which is G in the picture, starting with the point D as the (x,y)

The corresponding construction was done for Y, and the resulting point (X,Y) is point J. Point D was then forced to lie on a line, the sloping blue line, and as it is moved along the line the transformed point J moves on another line

Now the (x,y) point (B in the picture below, don’t ask why!) is forced to move on the blue circle. What does the transformed point do? It moves on an ellipse, whose size and orientation are determined by the actual transformation. At this point matrix methods become very handy.(though the 2D matrix methods cannot deal with translations)

The program produces a listing of all the actions requested, and these are listed below for this application:

Transformations of the plane are many and various.
The “nice” ones are “rigid motions”, and this term includes rotations, reflections and translations. The shape and the size of a geometrical object are not altered by a rigid motion.
There are also “shape preserving” transformations, called “dilations”, in which an object is stretched or shrunk equally in all directions.
An often overlooked transformation is the “shear”, in which there is a fixed line, and points not on that line are pushed parallel to the line in proportion to their distance from the line. Think of a stack of paper,perfectly stacked, and then pushed sideways so that the side of the pile is still flat. You will see a parallelogram at the front of the pile.
A shear will change the direction of a line, turn a rectangle into a parallelogram and turn a circle into an ellipse,
BUT
the area of any closed figure does not change at all.

Here is the static picture of a fixed point J, a fixed line, the x-axis, and a set of points on the horizontal line through A.
Also two triangles, LND and LDF, which are going to be sheared 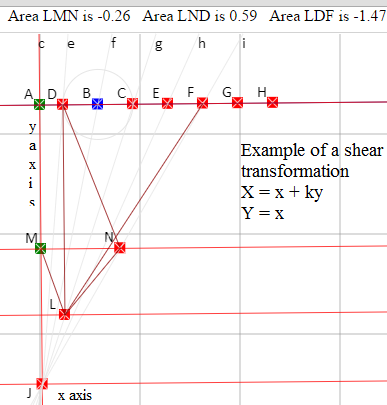 And here is the shearing in action, for varying amounts of shear, determined by the value of k.

Notice that triangle LMN changes a lot, and its area changes, but the areas of triangles LND and LDF do not change at all.
Not shown is a rectangle and a circle, which would change into a parallelogram and an ellipse, but their areas will not change with a shear.

For more on this go back to my Christmas post:
https://howardat58.wordpress.com/2015/01/02/quadrilaterals-a-christmas-journey-part-2/